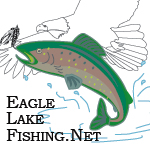 Our GALLERY is our top bookmarked page on our website(s). It is also the only photo gallery available any where that includes every season all year long at Eagle Lake Ca. Since we live in Spalding at the northwest shore of Eagle Lake’s middle basin, we have the opportunity to be here to take photographs and share our adventures so our viewers can keep up with our wonderful Eagle Lake. Many of our visitors are not able to come up between January 1 and opening weekend but they still wish they could. Our aim is to bring you here any day of the week and any time of the year. Consider us your “Virtual Eagle Lake”. Our photos and pages are copyright protected & fully registered with the Library of Congress. We are not affiliated with any agency and we are not a tourism website. We have no financial gain in what we do.

The spawn actually begins when the fresh snow melt hits the alkaline waters of Eagle Lake water via the tributaries and so our 2011 Eagle Lake Trout Spawn album will start with the first flows and first fish in the tributaries to the end of the spawn and flow of tributaries. It doesn’t take long before trout begin entering the fresh water flows and this year was no different for Papoose Creek. Papoose Creek had flowed intermittently since early December and when it flowed again on March 9 it was flowing faster and harder than it has in the last couple of years. Warm ambient temps melting the snow that fell in February and March helped get several tributaries flowing including Pine Creek which reached the dam/weir in the afternoon of March 10th. As of March 9, all but one small tributary along highway 139 were flowing but they were short lived. On March 28 there was no snow left along highway 139 at the lake, but there is snow above in that watershed but most likely will not come down to the lake. Merrill Creek finally began flowing on 3-14-11 and slowed down to a trickle within two days but it finally picked up and had a weir installed on 4-6. All tributaries ceased flowing. Pine Creek stopped flowing into the slough on 7-10 but was still trickling under the bridge on Eagle Lake Road. There was still plenty of water in Pine Creek above Eagle Lake Road on 7-7-11. 2005/2006 was the last year that Little Merrill flowed but it began flowing under Eagle Lake Road in April but has only reached the lake at the peak of flow and during a rain/snow storm which passes thru. We hope to see Pine Creek and Merrill Creek flow through opening weekend. The spawn ended when creek temps averaged 55 to 59 degrees F. The trap was opened again in mid June as flows of Pine Creek were going to be stopped by the dam/weir. The trap was checked several times and any fish returning from their adventure were assisted in getting downstream of the trap. Some baby trout minnows were trapped in the lower 3 miles of Pine Creek this season and a handful of smaller trout estimated to be too small for a planted trout and too large to be this years spawn. So, for the first time, there was a spawn of an estimated 200 minnows which were sent downstream of the trap earlier in June.